Aramco plans to invest $110 billion in the development of the Jafurah gas field that is estimated to hold some 200 trillion cu ft of gas, the Saudi press Agency reported.

Jafurah is the largest unconventional gas field in Saudi Arabia and could begin producing in 2024, the agency also reported. Production is seen at 2.2 billion cu ft daily, a rate to be reached by 2036.

Besides gas, Jafurah could also produce around 425 million cu ft of ethane, and 550,000 bpd of gas liquids and oil condensates.

Developing its natural gas reserves is a priority for the Kingdom as it seeks to reduce its reliance on crude oil for local power generation and switch to gas so there is more oil for exports. In the future, Saudi Arabia plans to generate 70 percent of its electricity from natural gas and the remainder from renewables.

Yet the Kingdom also plans to become a natural gas exporter, and soon, according to its new energy minister, Abdulaziz bin Salman.

"Soon you will hear about the ability of the kingdom to be a gas exporter," bin Salman said earlier this month without offering any further details.

At the same time, Saudi Arabia is also seeking international expansion in natural gas. Last year the company’s senior management noted this ambition in the first conference call of the company ahead of its initial public offering, which took place in December, noting an agreement signed with Sempra Energy for the purchase of 25 percent in the Port Arthur LNG project.

Crown Prince Mohammed bin Salman has ordered that the gas produced at the field should be prioritized for domestic industry, but analysts believe there will be a surplus available for export
........

Saudi Arabia's development of Jafurah, the biggest unconventional gas field in the country, will help eliminate the burning of some 688,000 b/d of crude that could be exported, the energy minister was quoted as saying on Sunday.

The Jafurah basin is a new frontier unconventional exploration play equivalent in size to the successful Eagle Ford play in south Texas. The basin is located immediately east of the adjacent supergiant Ghawar Oil Field. The middle to upper Jurassic organic-rich mudrocks are recognized as the source of Ghawar hydrocarbons and are being extensively evaluated across the Jafurah basin for shale gas potential. These source rocks, notably the Jubaila and Tuwaiq Mountain, and to lesser extent Hanifa Formations possess excellent hydrocarbon attributes such as high total organic content (TOC), and sufficient maturity, combined with a relatively shallow burial depths, allowing for economical unconventional shale gas and shale oil exploitation. 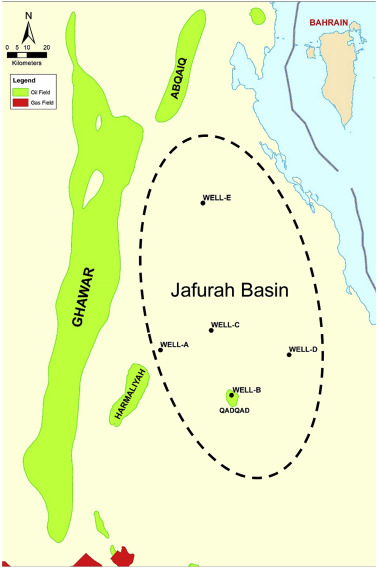